This table will apply roughly to anyone born near the 40° latitude in the north hemisphere. It gives the hour and minute when each sign is rising, that is, when it begins to rise and when it gives place to the succeeding sign. It is calculated to accord with the months half way between the two leap dates in 1920 and 1924 and therefore in using it for leap years and common years alike there will be a general error of a couple minutes after 1901 and four or five minutes for the latter part of the 19th century. Also, being made for the Central standard meridian, it is correct for the United States chiefly. At other parts of the world there will be an additional error of one minute for west Europe and two or three minutes for Asia. When the birthplace is north or south of the 40° latitude a margin for error of three minutes for every degree must be allowed. This, however, only when Cancer or Capricorn or their adjacent signs are rising. When Aries or Libra or their adjacent signs rise allow half that amount. The time given is when each sign begins to rise. For example, Aries will rise from 5:28 to 6:40 a.m. on March 31, and Taurus from 6:40 to 8:07. The hours above the horizontal line are before noon and those below it are after noon. They extend from about midnight to the following midnight (civil time). The hours in italics belong to the previous or following day. The last day of each month is given. To get the time for intermediate dates subtract four minutes for each day elapsed since the table date or add four minutes for each day previous thereto. Taking the nearest date will give nearly exact results.

In this way the table may be used for as high a latitude as 45°. Above that the error will increase for the signs as mentioned, when an allowance of five minutes and more per degree for the Cancer and Capricorn signs would render the table often useless. Below 40° it may be used more freely as the allowance for error may be decreased. 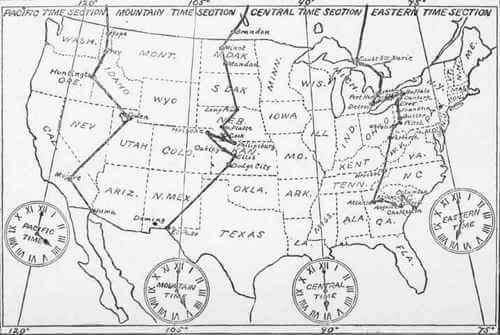