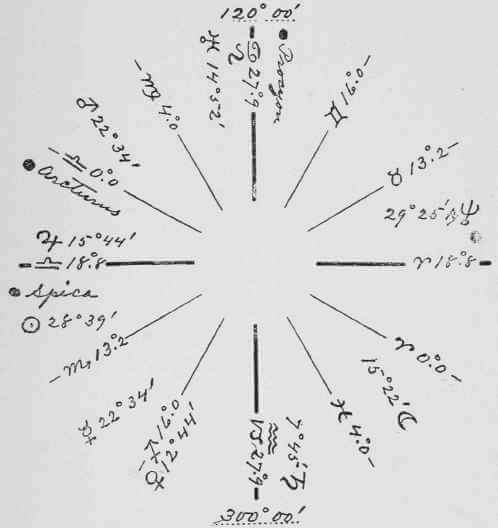 This is my birth horoscope. Hora scopus means in English one of two things: Hour pointer or hour view. Consequently there can be no such thing as a horoscope without the hour as its bases. Fortunately my mother distinctly remembered that “the clock struck six in the morning just as I was born.” However, the correctness of that old time country clock she was not so sure of. But the obvious indications of the figure erected for 6 o’clock showed that the time could not be many minutes wrong. In fact, the two most important events in my life, having then transpired, accorded with their most appropriate primary arcs so closely that a correction of less than two minutes in the birth hour brought them to time to the exact months of their occurrences. These arcs were: Ascendant parallel Moon in the zodiac falling due at my age of nearly 7, and Meridian conjunct Uranus in zodiac and in mundo falling due at my age of nearly 18. The first event was my adoption by relatives, involving a two days’ voyage, mainly by water. The other event was the death of my adoptive father, which completely changed my career and sent me traveling over the world.

When I became interested in astrology, Uranus was just then transiting over the radical place of my Venus. Almost invariably astrologers have taken up with astrology under some Uranus influence, which shows that Uranus has an affinity for astrology. At my birth Uranus was rising on a line passing exactly over Baltimore, the birthplace of Joseph G. Dalton. Mr., Dalton became my private instructor in the mathematics of astrology. As I journeyed across that horizon line for the first time a few years previous, I was just then reading some occult literature, also for the first time in my life, and which took my interest and finally led to an all-absorbing interest in astrology.

The Moon-culminating line of my birth runs over the San Francisco Bay and central over Oakland. The meridian (or culminating) line of primary Moon’s body at my age of 30 falls within 1° of the longitude at which I built my cabin at that age. This line runs now slightly on the other side of the cabin, and will recede as time goes on. I have been a resident of Oakland and later San Francisco and Libra Cabin for many years. I seem to have found my location. My traveling propensities are satisfied by my going back and forth between Libra Cabin and San Francisco.

Of course, the psychologist with his “subconscious” on the brain will be muttering: “Suggestion!” As the Frenchman would say: It is to laugh. I knew nothing about this locality system at the time I built my cabin and there is not one among a hundred astrologers who may read this and who will not rub his eyes over some of these strange terms. In fact, it was years after I found my location that I stumbled onto the idea during one of my reveries right in this cabin. The idea so impressed me that I instantly recorded the time of its conception. Years later I got into correspondence with an astrologer of unusual calibre, who had developed a complete system upon the same idea. Still later I discovered the nucleus to that very same idea expressed in a few words in an old out-of-print text-book, so there is really “nothing new under the sun.”

Again I can hear my psychologist retort: “How do you know that your subconscious mind did not solve your locality problem ten million years ago while yet in your ancestral body of a jelly-fish?” Of course I don’t know.

Among spiritualists there are some, who being tutored and controlled by astral disbelievers in astrology, for such intelligences there are also in that realm, whether it be inhabited by dispersoned individuals or by the mere thought forms of the subconscious is not for me to say. These people assert that when an astrologer makes a successful prediction it is because the long and tedious process of calculation makes it possible for “the spirits” to inspire the astrologer with the true vision of the future.

With an “ism” or “ology” on the brain we are not really arguing in order to eliminate our prejudices and retain the golden truth; our object is to make it thoroughly known to all concerned that I am right and you are wrong.

There is but little of the radical portents of my horoscope that may be of any special interest to my readers. The mundane parallel, partile sextile and mutual reception of my Mercury and Mars may interest the student and professional astrologer. This configuration is quite obvious and on seeing it for the first time it instantly arrested my attention. Numbers were my hobby already before I could add and subtract. Consequently my interest in astrology has been mostly limited to its mathematical development, which is more in line with astronomy. But, unlike unfortunate Mr. Proctor, mathematicians are usually poor diviners, while diviners are usually poor mathematicians. These two seem to vibrate on a different scale, they respond to different sounds of the celestial tuning fork. They do not harmonize, hence their clashes. And as it takes a natural born diviner with long experience to be a good reliable astrologer, I shall refrain from passing around the astrologer’s business card. My natural field of endeavor at present is that of the ideal astrologer’s (not the regular kind) servant – his “hod carrier.” To this end am I planning. In a few years hence I shall bring to the market a set of mathematical tables of a kind and calibre such as the astrological world of today has never dreamed of.

Several astrologers, on seeing the position of my Jupiter have remarked hastily and unobservant of my less obviously, but severely afflicted mid-heaven, that I ought to be a financier. Nevertheless, Jupiter is my “saving grace.” I have had many a narrow escape, but no more than slight scratches. Am generally fortunate in the narrow paths of life and am agreed to remain happy with small means. Inasmuch as this “Dr. Jekyll” (

) has “Mr. Hyde” well hidden in a much repressed latent (

) he is still unmarried, and, his Neptunian prospects being somewhat doubtful, he is solemnly warned not to commit it till he is old and needs a nurse.

Some astrologers seem to take pains to hide their horoscopes, not only from the public, but even from their fellow students. I believe the most valuable informations are gathered from the study of ones own horoscope, and the interested friends who have allowed me to delve into their lives are welcome to this glance into mine.

The above brief commentary on a nativity must suffice as an example in the solution of some of life’s problems and as a hint on how astrology may serve as a guide to those who wish to live wisely and seek happiness in their own natural field of endeavor and thereby avoid the miseries consequent upon our trying to do the things that are for someone else to do and our trying to be where we do not belong. We have a “free will” (so called) only to the extent that there is lubricating space in a well running machine. Too much play room and the end is near. Mother Nature is too wise to give to her children free scope without specific individual and personal limitations, so she builds around them hour-scopes for their own protection. She will not allow foolish man the chance privilege to throw monkey wrenches into her machinery and therefore, while we are by our latent natures urged on to live up to the full of our possibilities, we are promptly slapped by a kindly paw when we attempt to climb the strong walls of limitation built by her laws of birth. Such is the argument, – plain and irrefutable. Do not let any psychologist, however great in “gab” and “get” play upon your vanity with flattering suggestions that you are “supreme,” free and unlimited, for it is barely possible that you may believe him and go climbing on to pinnacles not meant for your present needs and from which the law of reaction will as surely pull you down, and you may suffer a fall from which you will be in pains to recover.